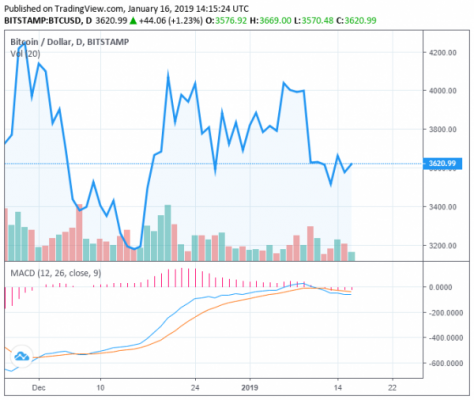 There is a high probability that the price of BTC and other cryptocurrencies will fall below key support levels in the short term, but analysts are positive in the long term.

Over the past 24 hours, the cryptocurrency market has rebounded from $ 120 billion to $ 123 billion as bitcoin's price avoided further falling below the $ 3,600 mark. Ethereum was also able to recover relatively quickly from the delayed Constantinople hard fork, which initially caused a 10% drop from $ 130 to $ 116. Bitcoin is expected to grow slowly in 2019
Due to the intensity of the previous sell-off, there is a high probability that the price of BTC and other cryptocurrencies will fall below key support levels in the short term. Some analysts believe that the dominant cryptocurrency will once again decline to its 12-month low of $ 3,122 in the last phase of the annual bear market, before recovering by the end of the year. Eric Tees, a technical analyst, said that similar to the Bitcoin price movement in 2015, the asset could now initiate a strong upward movement towards the end of 2019.

However, in the coming months, cryptocurrency researcher Willie Wu, best known for his work on Woobull.com, said the online bitcoin trading volume remains relatively low to suggest a bottom is set. Wu explained that while Bitcoin's sharp drop from $ 6,000 to $ 3,122 resulted in an increase in volume, it showed no sign of a period of accumulation.

Bitcoin and other major cryptocurrencies may take significantly longer than a few months to begin showing evidence of their accumulation on cryptocurrency exchanges and over-the-counter marketplaces. Until then, most analysts expect a high level of volatility in a low price range, which could lead BTC to revise its annual low.

What will happen to small tokens?
As BitMEX CEO Arthur Hayes has suggested, tokens and small blockchain networks with weak fundamentals and user bases are likely to struggle to survive throughout 2019.

Especially if Bitcoin survives another correction before bottoming out, perhaps by the end of the second quarter of 2019, illiquid tokens with low market capitalization could experience a free fall without selling pressure, leading to large losses in their price both in relation to Bitcoin and and to the US dollar.