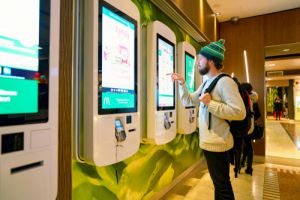 Bitcoin terminal manufacturer Coinme has entered into an agreement with Coinstar to install kiosks to quickly exchange coins for paper bills. From now on, Coinstar customers will be able to receive not only cash, but also bitcoins.

During the launch phase, this option will only be available to visitors to select Safeway and Albertsons outlets in California, Texas and Washington, but the company "plans to expand its offering to other US markets in the future."

Coinme CEO Neil Bergqvist is convinced that through his partnership with Coinstar, his clients will have a "convenient and easy way to buy bitcoin."

It is curious that, despite the main purpose of Coinstar kiosks, they sell bitcoins only for bills. “You cannot use coins to carry out bitcoin transactions,” the press release says.

To buy bitcoins, the user must enter his phone number and insert the indicated amount into the bill acceptor. After that, he will receive a code with which he can claim bitcoins on the Coinme website.

At the end of December, a study came out, the authors of which came to the conclusion that the infrastructure of crypto terminals around the world is growing, despite the market decline.